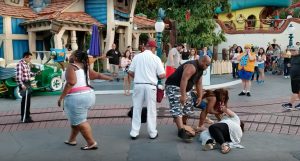 A man once told me that the reason why blacks cannot maintain anything of significance in our community is because of the simple fact that we cannot get along, which remains one of the vestiges of slavery that will not go away. A system inculcated by the slave masters to make servitude a lot easier to manage by first emasculating the black community, leaving most black homes to be raised by mothers only.

The result has had a devastating effect in the black community to the point where it has now turned into a circus and in today’s social media an entertainment that can be lucreative. Profiting of black ignorance is big business and it is sad to say we have no one else to blame but us, starting with the buffoonery ways some of us present ourselves to the world.

An example such ways will be this footage of a family who left their home together to have a fun day at Disneyland, California.

If you have ever had the privilege to visit Disneyland or Disneyworld like I have,  you will find out that it is the most family friendliest place on planet earth with kids and adults having one thing in common, FUN!

Disney is the last place you would expect what happened this past weekend when a family which comprised Grandmother, toddlers in strollers, children and adults started fighting one another.

Grandmother was knocked out unconscious, sister spitting in her brother’s face and brother punched the light out of her sister and brother inlaw. Kids and toddlers screaming all over the place.

Whatever the problem might have been to warrant such an abhorrent behaviour is not justified as there better ways to handle family disputes with efficacy. As a community we have to find a better solution to our problems as incidents like these only worsen the already tarnished reputation of our people.