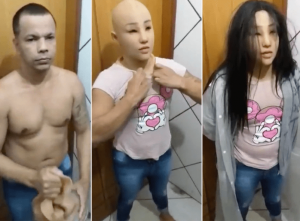 Clauvino da Silva botched jail break attempt was nothing short of a stupid idea and at the same time a sad one, as his daughter who had good intentions of helping her father is now charged with abetting prison escape.

Last Saturday, Clauvino tried to sneak out of the country’s most notorious prison where he was serving 73 years in a fake mask and clothing smuggled in by his teenage daughter.

In a brazen attempt to convince guards that he was his 19 year old daughter heading home after visiting hours, prison officers saw through what The Guardian termed “a low budget disguise” and asked him to strip in front of camera. The footage has gone viral.

This was not Clauvino first ruse to cheat the system. In January 2013, he was among 31 inmates who tried to tunnel out of the same prison complex through the sewer.

Reports on Monday showed the 42 year old drug lord has been moved to solitary confinement.