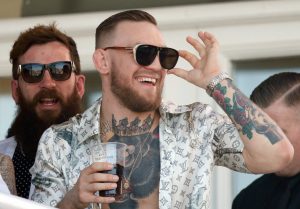 Conor McGregor’s erratic behaviour has been spiralling out of control since his multi million pay day from his bout with Floyd ‘Money’ Mayweather. His latest charade has caused many to suggest, perhaps drug abuse cannot be ruled out as the cause of his short fused temprement.

CCTV footage showed the MMA fighter landed a left hook on an elderly man The Marble Arch pub in an unprovoked attack after the 51 year old turned down a free drink from the star.

McGregor spoke to detectives during investigation and was not formally charged over the incident.

The superstar is no stranger to controversy. Last year, Mcgregor was spared jail after he caused criminal damage while attemping to confront UFC’s Khabib Nurmagomedov on a New York tour bus.

15 thoughts on “Blog 76: Connor McGregor Punches Old Man In A Public House After He Turned Down Whiskey Shot.”