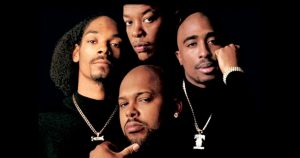 A Hip Hop era that can be imitated but never duplicated. Death Row records exploded in 1992 and birthed superstars like Snoop Dogg, gave life to a relatively unknown Tupac Shakur and blessed super producer Dr Dre among others.In 1996, Marion ‘Suge’ Knight reported that the company, 100% black owned, was grossing $200m a year which made him and his artistes multi millionaires in their twenties.

As the saying goes, if you fail to plan you are planing to fail. This adage could not be more true as in the case of Death Row records. The clandestine ways Suge conducted business was public knowledge, most notably using the Blood ‘Piru’ gangs to torture and extort label mates and some business associates amid several corrupt practices that ultimately led to the alleged East/West coast gang warfare.

The fictitious warfare was plagued as to why the most revered icons in Hip Hop history lost their lives, Biggie and Tupac.

Suge Knight is now behind bars for murder, Dr Dre went on to be a billionaire after he left Death Row amid questionable practices, Snoop Dogg and other artistes are still relevant in the music scene today.

The news came in yesterday as Hasbro (Children’s toy giant) announced it had purchased E1 entertainment (who owned all of Death Row masters worth nearly $300m) as part of its $4 billion merger.

This simply means all the music catalogue we grew up to is now owned and controlled by the toy company, it goes without saying that they can do as they please with such invaluable asset, even make toys with a classic Dre beat.

This include all of Tupac’s and majority of the popular and classic West Coast hits we were raised on. See NME report.