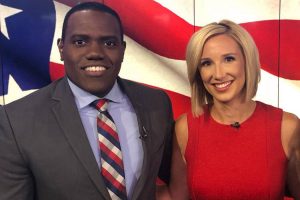 Alex Housden and Jason Hackett both co host the morning news on ABC’s affiliate KOCO 5 in Oklahoma City, until Housden’s sarcasm brought shame to the leading TV network when she compared her colleague to a gorilla live on air.

As the video of the ape taken from Oklahoma zoo played continuously, The white female anchor say to her black co anchor “it kind of look just like you” in a joking manner. But little did she know she would become famous for all the wrong reasons.

As the clip went viral in minutes, Housden returned to live TV the following day tearfully asking for forgiveness from not just Mr Hackett but black community in general.

Black social media refused to accept her apology as it has been reported hypothetically that she was “only” concerned about the future of her career.

Her prior and after picture clearly shows she looked gaunt in less than 24 hours, this is typical of someone been very worried about something.

Let’s give her the benefit of doubt that she truly meant well. However, she should have known better especially in the politically correct society that we live in. There are certain topics that are off limits and can only be discussed in your bedroom as your living room might not be safe as well.