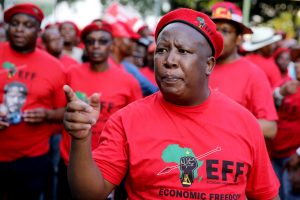 Julius Malema is the president of Economic Freedom Fighters (EFF), a far left political party in South Africa and immensely resilient voice for black people across Africa as a continent.

His disgust for white supremacy is overt and at times harsh as it should be, but no one can take away Malema’s love for his people in his stance as an unapologetically black man from South Africa.

Not typical of him to take back his words, it was nice to see him accepting responsibility and asking for forgiveness from other African states regarding the abominable situation of feminicide and Xenophobia that has gripped the continent’s second richest economy.

Violence erupted in South Africans as locals, majority of them blacks, descended on foreign nationals and their businesses over the extreme hardship due to lack of jobs in the capital.

At first they started with the caucasian South Africans which caused a massive ‘white flight’ to various parts of Europe in the mid 90s, now they have turned their frustration on their fellow African brothers and sisters from surrounding countries.

In Jappestown, around Kwa Mai Mai area, police exchanged bullets in a fierce stand off as authorities attempted to quell the looting and violence that manifested as a result.