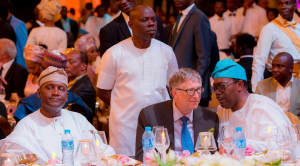 Generational wealth is simply quantified by the number of assets passed down from one generation to another. Why it is imperative to talk about it is the same reason blacks don’t own anything of significance today. Centuries of head start were passed down to whites descendants, thanks to the days of slavery.

About a century ago and prior when it was illegal to educate anyone of African descent, whites took the privilege of acquiring almost every assets they can get. Majority of these assets accumulated were passed on through generations which gave an unfair advantage and an irrational distribution of wealth in general.

Every major hotels, learning institutions, landmark buildings, media platforms and financial institutions are all owned by whites or at least 98%, while we are conditioned to become and remain employees.

Knowing full well if we remain employed, we will never stand a chance of having something of our own to pass on to our descendants but hope and the good old ‘education’.

Millennials are waking up and are doing so at a rapid pace. But, the wealth gap is damn near impossible to close. As a matter of fact where would one start when he or she don’t own anything to begin with?

Somewhere, some may argue but it is extremely tough to understand where exactly because we live in a society hardwired to celebrate someone who secures a job or a promotion in a work place but look down on the same person if he or she were to start a business.

No one can build generational wealth been an employee, becoming a business man with the right mentality is the only way.

In this article we will give five tips on how to build generational wealth besides the discipline of hard work it will take to achieve this feat.

1- DIVERSIFY YOUR MEANS OF INCOME– Mark Zukerberg owns Facebook. Facebook alone made him a billionaire but guess what, he did not stop there. Zuckerberg bought WhatsApp, Instagram, Oculus, and Live Rail. Let that marinate for a second and ask yourself why he had to make those purchases when he is already a billionaire. If he thinks it is necessary to have more than one income, why should we stick to 9-5 only?

2- THINK AHEAD STRATEGICALLY– This simply means sacrifice now for later. Work while others sleep so you and your posterity can live how they dream.

3- OWNERSHIP– If you don’t own it, it can be taken away from you at anytime. Been offered a job is a privilege that can be taken back, no matter how good you think you are at it. You simply cannot build generational wealth without ownership.

4- YOU MUST TAKE RISKS– Comfort is the biggest success killer than discomfort. Been an employee with paid sick days and annual leave is designed to keep us comfortable.

5- WINNING MENTALITY– This is by far the most important factor to have because without the right mentality, you can easily go broke even if you were given $100m