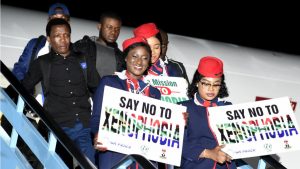 The Xenophobic attack reported in South Africa last week has propelled foreigners who were mostly Nigerians to leave South Africa for good, some of whom have lived there for more than three decades.

According to Al Jazeera, private Nigerian airline Air Peace volunteered to fly people back for free to the commercial capital Lagos.

An estimated total of 600 Nigerians were confirmed to have been on their way aboard the airline on two trips. The riot culminated at 12 fatalities and 1000 businesses owned by foreigners were destroyed in Pretoria and Johannesburg.

Among the nationalities attacked were Zimbabweans, Malawians, Mozambicans, Congolese and Ethiopians.

The repatriates claimed they left South Africa not by choice but for fear of their safety, as some alleged that neighbours they thought they knew for more than 30 years were the main attackers.