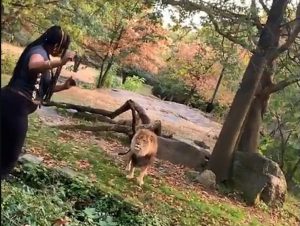 They say the most addictive drug known on earth is fame. People will stop at nothing to have a taste of what it is like to be famous for a minute, even for the wrong reasons.

Last week Saturday, A female visitor at Bronx Zoo New York encroached the lion’s space just to say hello to the beast. Further giving credence to the notion as she violated the rules imposed to guarantee safety of both visitors and animals.

It would not have been an issue if she were a certified feline trainer but to endanger lives for the sake of likes is nothing short stupidity or serious mental issues.

Even the lion thought she was crazy and pardoned her existence. Witnesses say everyone was stunned (including the beast) when she hopped in and started dancing while taunting the animal by saying hello.

The video of the woman identified as Myah Autry was broadcast on social media and many deprecated her contempt for the rules which could have cost lives and livelihood.