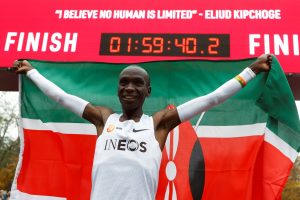 Eliud Kipchoge did what no one thought would have been possible when he ran 26.2 miles in under 2 hours. Putting things into perspective, Eliud ran the average of 13 miles per hour for 1 hour 59 secs straight when the average London traffic speed is only 7.4 miles per hour.

The 34 year old Kenyan did not raise the marathon bar in Vienna, he ripped the bar of its hinges to set the blue print of what one can achieve not only in the endurance testing sport but in every facet of life.

The time will not be held as an official world record because the race was a non-competitive one organised by INEOS chairman and Britain’s richest man Sir Jim Ratcliffe.

The INEOS 1:59 challenge is organise by the wealthy mogul to see if anyone is brave enough to run the marathon in less than the 2 hours, Kipchoge took him up on the challenge and proved it can be done.

The Guardian writer Ewan Murray thinks Kipchoge’s achievement were heavily aided and was not meritorious enough to be measured with the greats of sporting and historical acts. His cynical opinion about Kipchoge’s feat been given a ‘military level planing’ with huge budgets and special Nike shoes seen as the reason could break the barrier.

This is perhaps the most deriding article attempting to devalue Kipchoge’s success where anyone could have come forward or chosen if indeed money and aided assistance will suffice.

Kipchoge has made Kenya and Africans proud by being the first human being to do this, however contempt the optics of others’ view point may appear.