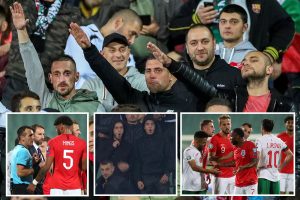 Anyone who thinks racism will stop is in denial of the harsh realities and the one person that is worse than a racist is the person who sits back and allow it to happen and do nothing about it.

The Bulgarian fans’ racist chants from the Monday game was nothing short of ignorance which I am not too bothered about because people like these will always be around.

What I was more worried about is why the black players continued playing. This only proves one thing, that millennial black children need to study their history past the pacifist civil right pioneers they have been forced fed in their schools.

All the black players did not need the validation of their white manager or colleagues to walk out of that pitch if they knew anything about self worth.

Gareth Southgate can only imagine but will never understand what is like to be black.

All I see is black young boys wanting to be stars with a penchant to win over what their ancestors died for to make sure they were even seen as human beings.

This is the very same servitude passed on from the days of slavery which has practically left blacks disrespected in all facet of life because these imbeciles know nothing is going to come out of it. Black people in that stadium ought to be ashamed of themselves.

Racism in Europe (especially Britain) is very subtle and stifling and this is as overt as it gets.  Because blacks in Britain have not been through half of what their brothers and sisters in America and South Africa does not mean it is not as bad, if anything it is worse.

Black Britain should learn how it is done from the Americans and stand down from any football engagement until something drastic is done to mitigate such an abominable act, even if it means they lose their high paying jobs.

This is more than money or the fame of playing in a competition, this is about the principles and standards they will set for black kids looking up to them.

These young players are more focused on ‘the bag‘ and a worthless praise of ‘showing character‘ than the principle of sacrifice, but what they fail to understand is that they are also responsible to show these little minority kids coming behind them that certain things are not acceptable.

Been servile to a sport that don’t care about your struggle for money only perpetuates these unacceptable behaviour.