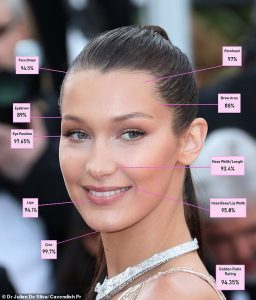 A group of doctors used Leonardo Da Vinci’s Golden Ratio to release the list of top ten most beautiful women in the world, even their token negro addition of Beyone in the second spot cannot fool conscious people into thinking that this list is credible, because it is not.

This has nothing to do with the beautiful women on the list as I am sure they did not ask for this. But it has everything to do with ethnic minority women who may think they will never be good enough because huge media platforms keep circulating their opinion of what beauty is.

Most ethnic minority women especially those from African descent have always had problems been comfortable in their skin and looks. Common examples are how they hate wearing their natural hair, significant weight loss and bleaching of their skin just because they want to look like Bella Hadid. I know of some that had babies with caucasians just because they want their babies to be light skinned and little girls still preferring white blonde baby dolls to black ones.

Would you really blame them for feeling they are not worthy to be their natural selves against caucasians? I know I wouldn’t because everyone loves to be on the ‘winning‘ side.

The most discriminating part is their proportionate measurment of what a beautiful face look like. These surgeons did not use any other race in this instance which makes it automatically biased and unfair.

Dr De Silva who runs the centre for advanced facial Cosmetics and plastic surgery in London said “Bella Hadid was the clear winner when all elements of the face were measured for physical perfection”. How someone of her expertise could even say that, knowing full well her message will permeate all over social media is beyond my imagnation.

Bella Hadid is crowned the most beautiful woman in the world which I am sure she is for some but I don’t think it speaks for all and sundry.

The Mirror caption says “Science Has “proved” That Bella Hadid Is The Most Beautiful Woman In The World“, which says in many words that even science don’t see blacks as beautiful when compred to whites. Their claim to say Hadid is scientifically proven to be crowned number one is not the same as a beauty pageant, ignorant people will hold on to these fabricated facts.