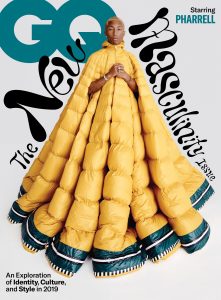 Pharrell Williams is stupendously rich and without a doubt an unquestionable talent. In 2002 and 2003, 30% of the music played in U.K. radio and 40% in the U.S. was written and produced by this diminutive genius. His 2013 song Happy from the Despicable Me 2 soundtrack album broke chart ceilings worldwide and spent an unprecedented 92 weeks at #1 in some countries.

Anybody who is somebody in music business must have his number on their speed dial, his contribution to music since 1992 is indelible and has been nourishing with “Eargasm” and infectious melodies . But, one thing Mr Williams is renowned for is his peculiar personality and eccentric perspective on a lot of things from his dress sense to his view points.

His latest GQ front cover and the optics of his opinion on gender fluidity has had many wondering what on earth is going on.

I am a huge fan of Pharrell’s work but I am not sure if he is in the position to tell us what the ‘new’ masculinity is.

No disrespect to the LGBTQ society but men dressing as women and vice versa is not for everybody and some of us have our opinions of what masculinity is and would like to preserve the good old tradition of what makes a man, “a man” and a woman likewise. 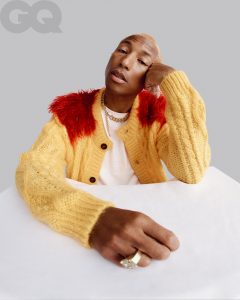 If he or anyone likes to cross dress, this is absolutely fine but imposing the idea on others is rather distasteful. Some may find cross dressing, gender fluidity, transgenders et al abnormal which is also justified because we all have our preferences. This must be respected as well others’.

Gender specifications is on its way to extinction and all major platform is in overdrive to make sure it dissipates faster, this has been sighted as the future. Some of us are not in a hurry to go to that future with those who are.

This may look like masculinity for some, where I am from this is not an acceptable form or display of what masculinity is. Perhaps it is deemed as a agenda to effeminately emasculate the foundation of black family, who know? 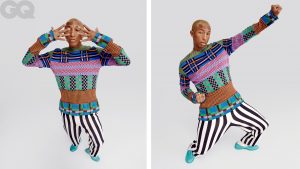 The question all boils down to is this really masculinity to you?