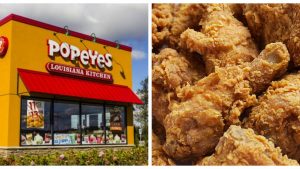 Ever been to America? If you have you will understand why Popeyes is arguably the leading spot for chicken and biscuits (scones in the U.K) especially among African Americans, their chicken sandwich is quite savoury and very tasty I might add. But, is it really tasty enough to stab a man ten times for jumping a queue?

America is big on fast food, so big that when Popeye first announced that they ran out of chicken sandwich a few months back, all hell broke lose.

As the chicken sandwich was recently re-released, it was expected to chaotic but who would have thought the anticipation would result in murder at a Popeyes in Maryland.

Two men were waiting on the queue at Oxon Hill’s on Monday night,  one man accused the other for cutting in front of him, Prince George’s county police spokeswoman Jennifer Donelan told news outlets.

This resulted in a heated altercation that resulted in a 28 year old man been stabbed ten times. The victim was rushed to the hospital where he succumbed to his injuries.

For Popeyes it was business as usual while police is still looking for the suspect.

Popeyes chicken sandwich  has been credited with causing long lines and hours-long waits across several counties in the U.S.