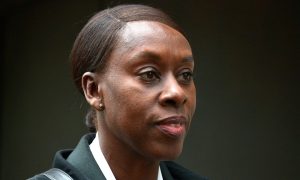 Supt Robyn William, 54, was sent a rather poor video image on Whatsapp by her sister. Something which is not uncommon in this virtual age where almost anything is shared and her offence was pretty much viewing the image instead of reporting her sibling to the police.

By every indication this first time offender was made to pay heavily for the simple fact that she is a black female who happens to be a well decorated senior police boss. Her prior good work in the Grenfell disaster where she received the Queen’s police medal were not taken into consideration.

Meanwhile the Queen of England’s second son, Andrew, who is well known to be linked to Jefferey Epstein pedophile ring is still very revered and walking around a free man, despite many sources placing the royal in the company of the pedophilia organisation with some claiming he partook of the vile act.

Prince Andrew was reported to have been ‘fired’ by his mother (who happens to be the Queen of England) from his £296,000 a year job like it would make any difference to his network of income sources. No idea why they think the people are gullible.

Unlike Andrew, Supt Williams was in a gym class in February of 2018 when the video ping on her phone sent by her outraged sister who wants the person behind the video to be caught and arrested.

Under the law on possessing indecent images, Williams will have to prove she had a legitimate reason to have it, or that she had not seen the video and did not have reason to believe it was indecent.

Williams, who had denied possessing an indecent image of a child, looked stunned as the jury delivered its 10-to-one majority verdict after more than 10 hours of deliberation.