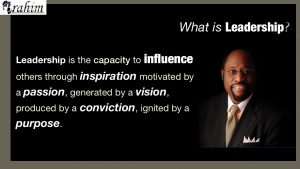 Have you ever been to a working place where certain types of people get a little position, entrusted with a team to lead and sometimes they let the job title get to their head? Bossing their subordinates around like the establishment was passed on to them by inheritance?

These people are typically referred to as managers, even though their job descriptions may say they are to lead a team employees. Such people are way too insecure to be leaders hence they will do whatever it takes to be seen doing something, even if it means making other feel small to elevate their relevance.

Managers will never ever be leaders, although they think they are sometimes.

As one of the greatest spiritual minds to ever walk the surface of this earth puts it, leaders influence people not repel them.

The spirit or attitude of a leader is measured by the way he or she thinks. This is the complete opposite to a manager that follow orders. One of the key qualities of a leader is that he or she work for the people they lead with the objective to bringing out the best in them, and hopefully raise someone to take over the leadership role. A manager or a boss of a department thinks the opposite and are quick to let everyone know who is in charge.

Dr Myles Munroe further explains that although leadership is born out of anger, the mission is always for the betterment of the people and improvement of mankind.

In other words leadership is born when toleration ends, because whatever you tolerate you will never change. And anyone who cannot change the status quo is simply a manager and not a leader. Hence unlike managers, leaders are few and far between.

Managers always want to be liked or given a seal of approval by their superiors, leaders don’t worry about been liked.

A manager maintains and enforces rules, a leader changes rules and if he cannot he or she will make one.

A manager follows policy, a leader creates policy. A manager maintains tradition, a leader does not care about traditions.

A manager asks how much because they focus on the mission at hand, a leader says to hell with the cost because they see the vision.

Managers are made, leaders are born.