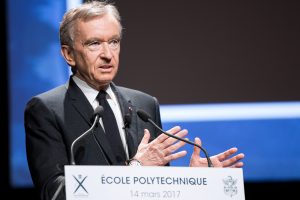 He is the chairman and chief executive officer of Louis Vuitton Moet and Hennessy (LVMH), recently named the second richest man on earth with a net worth of $100.8 billion.

Urban Hip Hop rappers played a key part to his surge in wealth from a ‘paltry’ $200m in 1997, as they gave (and continue to give) free advertising to a brand that own and controls other exotic brands like Hublot, Givenchy and Rihanna’s Fenty beauty and fashion.

His recent deal with Belmond which operates luxury hotels, trains and safaris is said to be a smart move which helped the luxury goods power house to keep their pulse on other vested area of interest outside fashion.

Arnault told forbes in 1997 “People do not understand that success stems from cohabitation of two spirits: the artistic vision and the logic of worldwide marketing. It is a very complex process.”

1 thought on “Blog 76: Bernard Arnault Is Now The Third Human Being to Reach Twelve Figures Net Worth.”